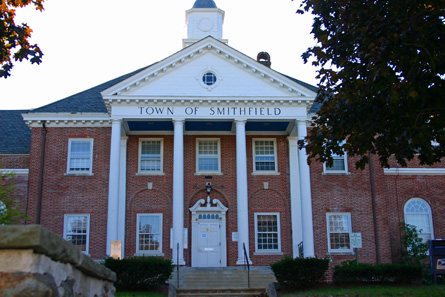 Neil Salley has lived in Smithfield nearly his whole life and is the artist who created the official town seal. Salley gives viewers a rare peek at the early designs of the seal, and how his knowledge and love for his town drove the design of the final product. He tells personal stories about growing up in town, and his love for the Smithfield community.  Salley also explains the unusual way his career as an artist began.

Smithfield Airport came to be because local resident, John Emin, needed a place to land his airplane. Little did he know that just days after erecting a hanger and sign for the Smithfield Airport, that a now-famous WWII pilot would make a stop in Smithfield. That stop not only saved the pilot’s life, but many would argue changed the course of the war, and definitely changed this local family forever.

The Smith-Appleby House is now a museum on seven acres, and headquarters to the Historical Society of Smithfield.  The home was built in 1696 by the great-grandson of one of the original party of six men who left the Massachusetts Bay Colony with Roger Williams to start the colony of Providence.  The original 40-acres granted by Roger Williams grew to almost 700 acres at one time, and has been the site of a grist mill, a saw mill, and a blacksmith shop over the years.

The men and women of the Smithfield Fire Department proudly serve their community every day. Told by those who know the department best, the story describes the earliest volunteer departments in the 1800s, and the evolution to the current-day paid firefighters. Also presented is how the town has acquired the equipment and apparatus to fight fires through the years. The segment also includes tribute to those who lost their lives in the line of duty, as well as some notable fires through the years.

The Mary Mowry House is an historical home on 20-plus acres in Smithfield.  After more than a decade of sitting vacant, the home is being refurbished through a partnership between the town and several non-profit organizations. The segment presents a first-hand look at before and after photos of the improvements being made to the homestead, originally built in the 1700s. The segment also describes the unique partnership and how it works to preserve one of the area’s oldest homes.

Other segments include 130 years of the public library, the old Smithfield bank, and the Farnum House. 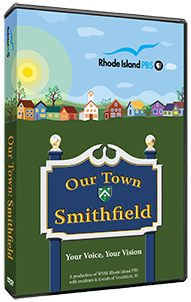 CLICK HERE to own Our Town: Smithfield and support Rhode Island PBS. Thank you!

Our Town: Smithfield is made possible by residents and friends of Smithfield and by: