Promise to My Father: Holocaust Remembrance 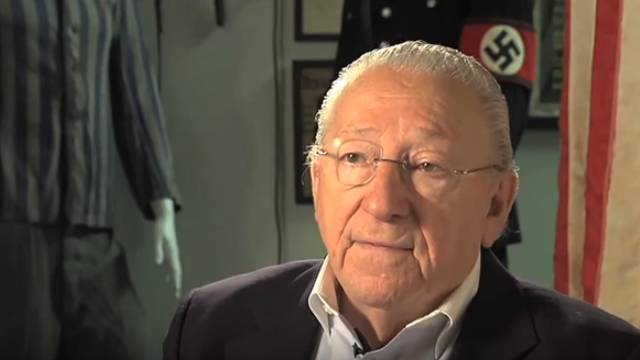 In April of 2012, the World War II Foundation took Auschwitz survivor Israel "Izzy" Arbeiter back to a place in Poland where unspeakable tragedies occurred.

A Promise to My Father, presented by Rhode Island PBS as part of Rhode Island Stories on Thursday, April 20 at 8 p.m. to commemorate Holocaust Remembrance Day (April 24), focuses on Izzy Arbeiter's incredible personal story of survival and his return to the site of the tragedies. The film will encore on Saturday, April 22 at 11 p.m. and Sunday April 23 at 7 p.m.

The story begins in Poland with just a few words from his father just before his father, mother, and younger brother were sent off to the Treblinka death camp, where they were murdered. The journey moves on to Germany and ends in the United States of America with hope for a new life.

The final words his father ever said to Israel Arbeiter helped motivate the Polish teenager during the worst of times, as Izzy moved from concentration camp to concentration camp, forced to work as a slave laborer for the Nazi war machine.

On his final journey back to Poland in 2012, Arbeiter also visited the basement of his old home in the city of Plock, where on September 3, 1939, his family buried several Jewish religious artifacts to keep them hidden from the invading Germans. The home is now condemned, but that didn't stop Izzy from his mission of trying to unearth these religious symbols for the first time in 73 years.