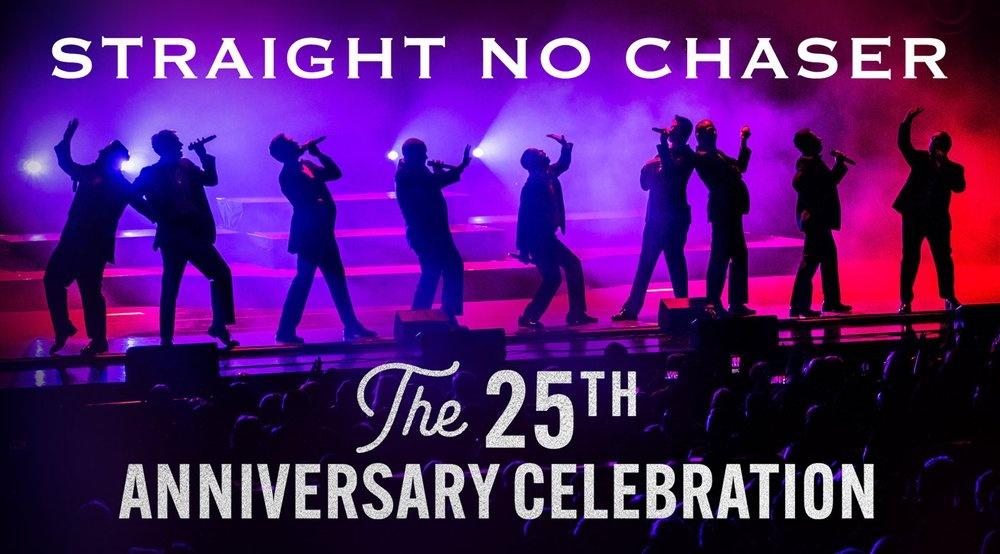 $200 - For your gift of $200, receive as our thank you 2 concert tickets, plus passes to a pre-show Sound Check to see Straight No Chaser at The VETS on Friday, December 2 at 8pm.

If the phrase "male a cappella group" conjures up images of students in blue blazers, ties, and khakis singing traditional college songs on ivy-covered campuses. . .  think again.  The nine vocalists in Straight No Chaser - now internationally famous - can walk onstage anywhere in the world and immediately bring audiences to their feet.  They do this with nothing more than microphones in hand, grins ear-to-ear, witty banter on point, and an uncanny ability to belt out songs with style, swagger, and spirit.  In 2019, Straight No Chaser celebrated their 25th anniversary with a concert filmed at the Murat Theatre at Old National Centre in Indianapolis, the same concert hall the group has sold out 27 consecutive times over the last decade.  Straight No Chaser: The 25th Anniversary Special features classics like "Proud Mary," "Lean on Me," and "Twistin," as well as contemporary classics like "I'm Yours," "Shut Up and Dance," and "All About that Bass.”

Rhode Island PBS is excited to offer concert tickets and an opportunity for exclusive meet and greet as our sincere thank you for your donation. See Straight No Chaser on Friday, December 2 at the Veterans Memorial Auditorium, at 8pm.

Watch for broadcast of Straight No Chaser: The 25th Anniversary Celebration on Rhode Island PBS!