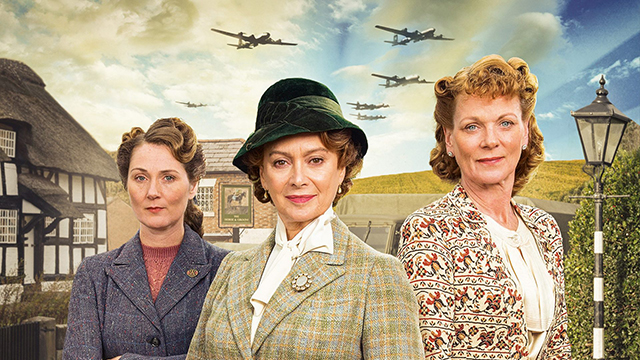 With the fall of France, Great Britain stands alone against superior German forces. The Battle of Britain rages in the skies overhead and, with daily air-raids, the threat of invasion and defeat is palpable. For some of Great Paxford's women, the war throws off peacetime limitations, allowing them to flourish in unexpected ways. Some must deal with tremendous loss; some find searing moments of joy; while others tread difficult paths towards happiness amid the chaos and uncertainty enveloping the nation. As Britain finds itself increasingly beleaguered, relationships, friendships, and loyalties within the Great Paxford community will be tested as never before.

It's June 1940, and Britain faces the threat of imminent invasion. Pat strikes up a friendship with a Czech soldier stationed nearby.

Laura’s problem becomes public. A soldier returns home on leave, but the family reunion is soured by his overriding concern about invasion.

As the Battle of Britain intensifies, the women must do all they can to keep spirits high. Joyce gives Sarah some unwelcome advice.

Teresa is asked on a date, but can she throw off her old life so easily? Alison worries that her involvement with the Lyons could have dangerous consequences.

It’s harvest time, but time is running out to meet the quota required, and Steph risks losing the farm. Sarah finds herself in a dangerous situation.

There’s cause for joy in the village as everyone prepares for a wedding. Pat has a big decision to make, but Bob has one last trick up his sleeve to thwart her plans.