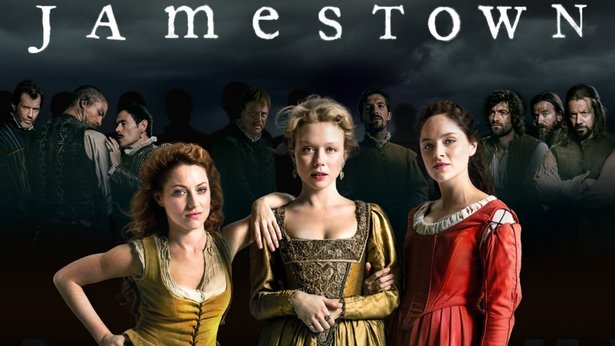 An English ship arrives in 17th Century Virginia with women destined to marry the frustrated men of Jamestown. They’re faced with a hazardous wilderness and physical hardship, but are drawn to the intoxicating hope of freedom and adventure.

Farlow and Redwick’s disdain for their new female neighbors intensifies.

Pamunkey warriors descend upon the colony and the settlers meet with powerful tribal leader Opechancanough.

Rumor of a goldmine map sends suspicion around the settlement.

When Yeardley is struck down by illness, Redwick sees an opportunity to cause civil unrest.

A disgruntled Verity succumbs to the bad habits for which she was jailed back in England, the Sharrows’ crop comes under a potentially devastating threat and as the settlers mark the summer harvest, an arrival in town disrupts the celebrations.

Henry presents his new found riches to the townsfolk and soon acquires himself an array of eager friends.

A boat arrives from England with news for Temperance and important instructions for Yeardley. Redwick strikes a covert and divisive business deal. As the farmers celebrate summer harvest, a new and deplorable chapter in the town’s history begins.

From the makers of "Downton Abbey," this stunning new series follows the lives of three women as they wrestle with the challenges of creating a new life in a beautiful yet forbidding land. In the 17th century, on the edge of the breathtaking but untamed Virginian wilderness, sits the English colony of Jamestown. The settlement barely survived its first decade but is on the brink of change summoned by the arrival of a new governor, Yeardley, and 90 so-called "maids to make bride" – a bid from the presiding Virginia Company to establish the town as a prosperous place for all. Yeardley also brings with him a charter, granting land to the earliest settlers in reward for their loyalty, but new laws cause power struggles within the town and with the native inhabitants.