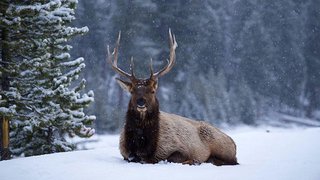 Great Yellowstone ThawEPISODE 1
A Yellowstone winter is a brutal one. With temperatures that plunge down to minus 40 degrees Fahrenheit the wildlife has to find strategies to survive. Some animals leave, some hide and some tough it out. Grizzlies hunker down and hibernate, but this winter the temperatures have been erratic and some bears are emerging early. Finding food is a huge challenge, but our camera crews follow one male who's lucky enough to hit the jackpot and find a bison that's been released from its icy tomb down in the valley. But he has to hang onto it while the scavengers hassle him. Great Gray owls suffer as their prey hides under an icy layer of snow that proves almost impossible to break through. Will this lack of food affect their mating and ability to raise a family in the Spring? Cameraman Jeff Hogan is following them to find out. And top wolf biologist Doug Smith explains why he's concerned about the number one predator. With a winter that's had less snow than usual it's favored the prey and the wolves are starving hungry. Host Kirk Johnson who's the Sant Director of the National Museum of Natural History in Washington, visits this unique wilderness to unravel the story of this particular winter in Yellowstone. 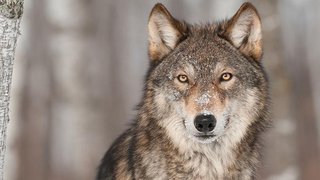 Great Yellowstone ThawEPISODE 2
Our cameras continue to follow the wildlife dramas in Yellowstone, and Spring brings many new challenges. While the brutal cold temperatures and deep snow of winter have gone, the weather is still erratic and there's the impending danger of the Thaw. When temperatures are high enough to melt the snowpack, millions of tonnes of water will cascade down the mountain, bulldozing everything in its path. Wildlife cameraman Jeff Hogan discovers a nest of Great Gray owls. There are three chicks, but one is a runt, significantly smaller than its siblings and at risk of starvation. And when the worst storms for years hit the Beartooth Mountains, Jeff wonders whether it can hang on. Down on the Snake River the family of beavers is busy making the most of the Spring vegetation. Infra red cameras give Jeff and host Kirk Johnson a secret view of life inside the lodge, as the beavers squabble over food. Kirk also dons a dry suit to head underwater to admire the engineering skills of these rodents. Massive boulders and branches are there to strengthen their dams, but will they be enough to withstand the Thaw. When the torrent of water begins to hit, Kirk joins a hydrologist to help measure the water flow in the rivers and work out how this year's weather has affected the Thaw. And bear expert Casey Anderson follows a mother grizzly and her cubs - and explains that the biggest dangers come not from other predators, but surprisingly from their own kind. 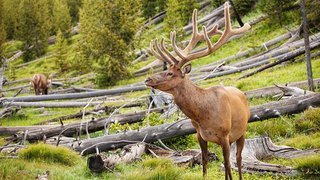 Great Yellowstone ThawEPISODE 3
It's summer in Yellowstone, and with soaring temperatures and drought comes the risk of wildfires. All the water from 'The Thaw' has flowed away and a lack of rain has left the ground tinder dry. When a major blaze breaks out in the Beartooth Mountains, wildlife cameraman Jeff Hogan scrambles a team to see if the family of Great Gray Owls he's been following all year has survived. The beaver family now has three young kits. But Jeff is shocked when their mother suddenly moves them out of the family home. It's a risky journey over dams and upriver and not something he's ever witnessed before. Meanwhile the Pinnacle Peak pack of wolves near Jackson also has young and in a year that's been tough for Yellowstone's top predator, wildlife photographer Charlie Hamilton James unravels why this pack is doing better than most. Up in the Gallatin Mountains are two orphaned young grizzlies. Host Kirk Johnson joins bear expert Casey Anderson to witness the relationship between man and bear on ranch land, where there's a balance of mutual tolerance. But with no mum alive to teach them, these yearlings are vulnerable and Casey is worried. As our climate changes, one of the biggest signs in Yellowstone is the effect on pikas. These alpine mammals rely on the cold high up in the mountains.But as temperatures slowly increase, the pikas are struggling. Kirk meets a scientist studying them to see what's going to happen when there's nowhere left to go but the sky.

Greater Yellowstone is a unique place. Nestling high up in the Rocky Mountains in North West America, this ecosystem is one of the world’s greatest wildernesses. But it’s a place of extremes, and the wildlife must deal with one of the toughest springs on Earth. To understand how, this series is following a number of iconic wildlife families – including wolves, grizzlies, Great Gray Owls and beavers. Using the latest filming technology, the team of scientists and cameramen track the animals and analyse what’s going on. Host Kirk Johnson, the Sant Director of the National Museum of Natural History, heads the team and also gets to grips with the science behind what makes Yellowstone tick.
OFFICIAL WEB SITE