Team registration opens in September, the qualifying quiz is held in October, and team competition and show taping occurs in November.

Click here for Frequently Asked Questions for information and dates. 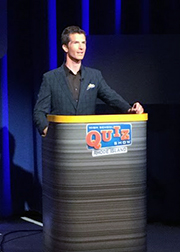 A professional actor, teacher, and production artist, Joe Short has performed in numerous theaters in Boston, New York, and Washington DC. Locally, he has performed at Trinity Repertory Company, the Sandra Feinstein Gamm Theater, and the Wilbury Theatre Group in Rhode Island.

Mr. Short was a founding artistic associate of Bridge Rep of Boston and an early member of Providence’s The Wilbury Theatre Group. He has taught acting at area universities, and has been an adjunct instructor of acting, voice, and movement at the University of Rhode Island since 2010. His interest in the technical craft of theater includes his work as the production technician for the Theatre, Dance, and Media concentration at Harvard University, and as production manager of the Gloucester Stage Company since 2013. Mr. Short earned his B.F.A. at the University of Rhode Island, and is an M.F.A. graduate of the Brown University/Trinity Rep Consortium.

About Our First Season’s Host 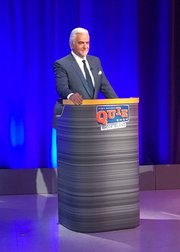 John O’Hurley was the host of the first season of High School Quiz Show: Rhode Island®. The award-winning actor portrayed J. Peterman on Seinfeld and hosted Family Feud for four seasons. Mr. O’Hurley is a graduate of Providence College.