Are You Being Served?

As Time Goes By

Jean and Lionel's lives intersect again 40 years after they lost touch with each other.

Poplar welcomes Lucille Anderson, the first West Indian midwife to be featured as a series regular. Tested as never before, the nuns and nurses face challenging issues.

The series follows the intertwining lives of three Manchester couples at different stages in their relationships.

A hotshot surgeon is forced to change careers when he develops a fear of blood.

Each episode sees the enigmatic priest investigate a crime in his own particular way, using intuition and psychology.

Patricia Routledge stars as Hyacinth Bucket (she pronounces it boo-KAY). Hyacinth will go to maniac lengths to ensure that even the most routine of daily events is just so.

Roommates can be a challenge while they’re living, but Marley Wise, who can talk to the dead, now has three from beyond the grave!

From Cathy's 60th birthday to Fireworks Night, we follow a year of her life as she moves closer and closer to Michael.

Comedy thriller about two well-meaning idiots who become entangled in a hideous world of crime, conspiracy and corruption.

Comedy about William Shakespeare as he starts to make a name for himself in London while also trying to be a good husband and father for his family in Stratford-upon-Avon. 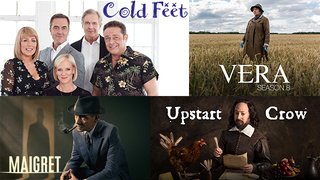 New Britcoms
You will have opportunities to meet more new (for us) characters and series from "across the pond." Fresh from the recent BBC Showcase conference, we picked up several new offerings that will roll out over the next year or so. Here is a short list of titles you can expect to see:

In the comedy space:

Cold Feet - At times comedic and at other times heartbreaking, the series follows the intertwining lives of three Manchester couples at different stages in their relationships.

Upstart Crow - Comedy about William Shakespeare as he starts to make a name for himself in London while also trying to be a good husband and father for his family in Stratford-upon-Avon, writing Romeo and Juliet, and his sonnets.

In the mystery and drama space:

Maigret - An adaptation of the books by Georges Simenon featuring his fictional French detective Jules Maigret.

Vera - Detective Chief Inspector Vera Stanhope is a middle-aged employee of the fictional Northumberland & City Police, who is obsessive about her work and driven by her own demons. She plods along in a constantly dishevelled state, but has a calculating mind and, despite her irascible personality, she cares deeply about her work and comrades.

Pledge Your Support Today!
Thank you for supporting the British programming on Rhode Island PBS. We truly would not be able to air these programs without your help.

Stay in Touch. We Will, Too.

As always, you are invited to write to us and let us know what you like to watch and why. We so look forward to hearing from you.