Last Updated by Remy Chester on 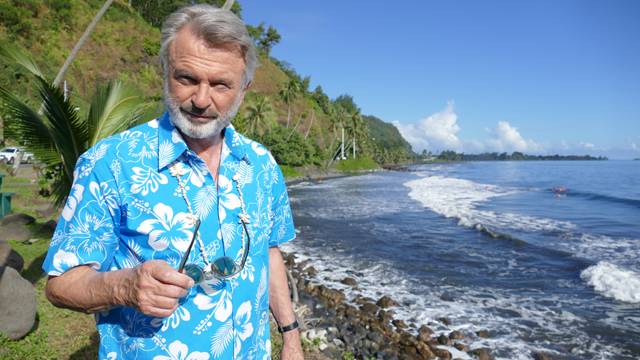 Two hundred and fifty years after Captain James Cook's first voyage to the Pacific Ocean, actor Sam Neill (And Then There Were None, Jurassic Park) sails in Cook's wake using contemporary modes of ocean travel. In the six-part series, PACIFIC WITH SAM NEILL, Neill explores the three world-changing voyages that Captain Cook undertook to link the Pacific with Europe.

Episode #101 - "Endeavour and Tahiti"
On the 250th anniversary of Cook leaving Plymouth, Sam Neill visits Tahiti in the first of six episodes, following Cook’s journey around the Pacific, where he hears from Tahitians about what Cook’s legacy means 250 years later. Through the intercession of Joseph Banks, the expedition’s botanist, Cook takes on board the high priest and navigator Tupaia, whose significance, attributes and influence will develop along the voyage, but will not be fully registered until the end of the Twentieth Century.

Much of Tahiti’s centrality to the settlement of Oceania was not fully understood until recently. Polynesians, the people of the ocean, were among the first to settle in Tahiti. Sam encounters ardent enthusiasts and practitioners of Tahiti’s vibrant culture.
Tahiti’s traditions range from new to old, and when these traditions are lost, Sam learns that the Tahitians are happy to make them up.

Episode #102 - "Endeavour and New Zealand"
The second of six episodes following Sam Neill travelling in the wake of Captain Cook around the Pacific, 250 years after Cook made his first voyage. This episode sees Sam in New Zealand, the country he calls home. Sam considers not only the cultural ramifications of Cook’s first interactions with the Maori people, but also the continuous social and political impact that Western settlers had on both the land and people. Speaking with historians, activists, artists and locals, Sam delves into a deep history of trade, tradition and turbulent conflict. To his surprise, Maori oral memories of Tupaia are more strong and vivid than those of Cook. Reconnecting with lost Polynesian history was far more potent than awe at the foreign goblins.

Episode #103 - "Endeavour and Australia"
The third of six episodes where Sam Neill travels in the wake of Captain Cook around the Pacific, 250 years after Cook made his first voyage. Having fulfilled his Admiralty brief, Captain Cook opted to take the long way back to Britain so he could chart the East Coast of Australia and explore the mysterious land. The Aboriginal people showed more caution than their Polynesian counterparts upon the Endeavour’s arrival, seemingly indifferent to the strangers and wishing them gone. This understandable reticence was misinterpreted and later led to the myth of Terra Nullius. Sam travels from Botany Bay up the east coast to Cooktown, learning about a country which, far from being nobodies’ land, was comprehensively inhabited by a well-established culture.

Episode #104 - "Resolution and the Great Southern Continent"
Episode 4 deals with Cook’s second voyage aboard the Resolution in search of the Great Southern Continent. He circumnavigates the Antarctic, without ever sighting land – an extraordinary achievement in a flimsy ship at such latitudes. During this feat he begins the painstaking process of filling in vast unknown areas on the map of the Pacific. Sam visits New Zealand, Tonga, Vanuatu, and Norfolk Island before completing one of Cook’s unfinished ambitions: touching down on Antarctica. Sam, in a much more intimate way, mirrors what many consider Cook’s greatest achievement, the breadth and extent of the second voyage. In Sam’s case, Antarctica is a first, as is reaching the crater of a very active volcano, Mount Yasur. While visiting Norfolk Island, standing in the ruins of its penal settlement, Sam acknowledges an intersection of Pacific and Cook history – with his own family in a startling revelation.

Episode #105 - "Resolution and the Northwest Passage"
The fifth of six episodes following Sam Neill travelling in the wake of Captain Cook around the Pacific, 250 years after Cook made his first voyage. Swapping a potentially easy life of retirement for a third voyage around the Pacific, the relationship between Captain and crew is severely tested as Cook leads his men on an expedition that - if successful - would dwarf everything he had so far achieved: discover and navigate the Northwest Passage. Sam Neill continues to follow the path of the Resolution, again via through New Zealand and Tonga onto Canada and Alaska, experiencing the Pacific like never before.

Episode #106 - "Resolution and Hawaii"
The last in the six part series following Sam Neill travelling in the wake of Captain Cook around the Pacific, 250 years after Cook made his first voyage. In a bid to find the not yet existent North West Passage, Cook encountered vast ice ranges and saw the impact of colonization first hand, when entering part of Alaska already overtaken by the Russians. Forced back by the ice shelf, Cook retreats to Hawaii for R&R before returning to the Arctic the following summer. But that was not meant to be.

After nearly 11 years of voyaging from the Antarctic to the Arctic Circles trading, observing, befriending chiefs and villagers alike, and even participating in local culture, Cook is clubbed, stabbed, and drowned in a quintessentially tropical paradise. How did it come to this? Or as one of the people Sam meets says, ‘How did it not happen before?’

Back in Australia, Sam views an unfinished tapa waistcoat abandoned by Elizabeth Cook after her husband’s death – a poignant memento. A larger than life stainless steel sculpture of Cook by Michael Parakowhai is the focus of Sam’s reflections on Cook.

Finally, on an uninhabited islet in the mid-Pacific, Sam concludes his journey as he has transitioned from being a ‘mere actor’ to becoming ‘a man of the Pacific.’