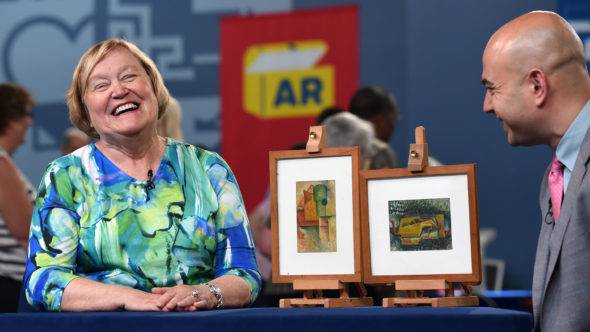 From the official Antiques Roadshow release:

After more than 20 years searching for America’s hidden treasures, ANTIQUES ROADSHOW finds sensational first-time objects in six cities featured as part of season 22. From eyewitness accounts of historic moments to items that are truly macabre, ROADSHOW appraisers, guests and locations make this a ground-breaking new season.

“I was amazed by the number of never-before-seen items discovered on this year’s tour,” says executive producer Marsha Bemko. “That mix of new treasures and sizzling stories along with our first event filmed at a Gilded Age mansion in Newport, RI, fills this season with can’t-miss episodes!”

Along with discovering the mystery of the mosquito and the masterpiece, viewers will see other first-time items such as:

· In Harrisburg, Pennsylvania, a head in a box! A plaster head, that is, of a convicted bank robber who fashioned the prop to aid in his attempted prison escape. Harrisburg episodes will air January 21 and 28.

· In Portland, Oregon, an eyewitness account of the assassination of President Abraham Lincoln captured in a letter written by the guest’s grandfather, who was at Ford’s theater that fateful night and captured a most remarkable description of John Wilkes Booth.

· In Newport, Rhode Island, a one-of-a-kind 1939 Royal typewriter, plated by Cartier in 24k gold and presented to the guest’s grandfather, who was vice president of sales at Royal during the period. Newport episodes air in May.

ANTIQUES ROADSHOW airs on Rhode Island PBS on Sundays at 8 p.m. More on the Newport episodes, including exclusive images from the event at Rosecliff mansion, coming later this spring!